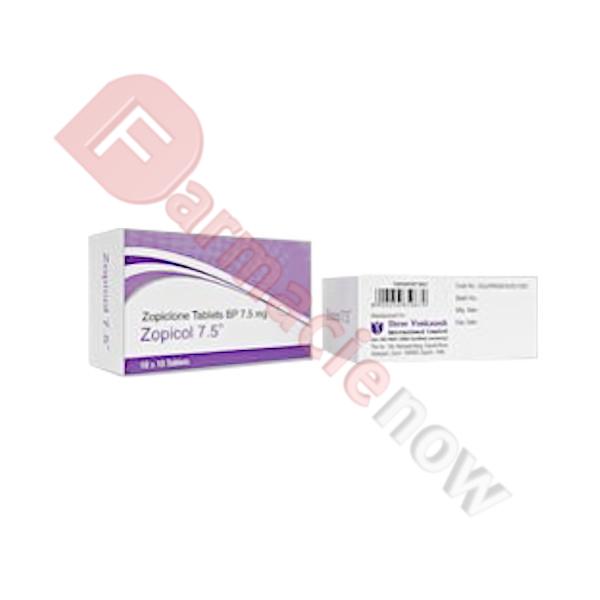 Zopicol (Zopiclone) 7,5mg is a nonbenzodiazepine hypnotic agent used in the treatment of insomnia. Zopiclone is a type of sleeping pill that can be taken to treat bad bouts of insomnia. It helps you fall asleep more quickly, and also helps stop you waking up during the night.

Zopicol (Zopiclone) 7.5mg is a nonbenzodiazepine hypnotic agent used in the treatment of insomnia. Zopicol (Zopiclone) 7.5mg is a type of sleeping pill that can be taken to treat bad bouts of insomnia. It helps you fall asleep more quickly, and also helps stop you waking up during the night.
ZOPICLONE is a hypnotic agent, and a member of the cyclopyrrolone group of compounds. It rapidly initiates and sustains sleep with reduction of total REM sleep and with preservation of slow wave sleep. Negligible residual effects are seen the following morning. Its pharmacological properties include hypnotic, sedative, anxiolytic, anticonvulsant and muscle relaxant actions. These are related to its high affinity and specific agonist action at central receptors belonging to the “GABA” macromolecular receptor complex modulating the opening of the chloride ion channel. However, it has been shown that zopiclone and other cyclopyrrolones act on a different site to those of benzodiazepines including different conformational changes in the receptor complex.

Zopicol (Zopiclone) 7.5mg is used for the short-term and symptomatic relief of sleep disturbances. Zopiclone can help with difficulty falling asleep, frequent wake-ups during the night, or early morning awakenings. The recommended dose of Zopiclone is 7.5mg by the oral route shortly before retiring. A lower dose of 3.75mg zopiclone should be employed to start treatment in the elderly. Depending on effectiveness and acceptability, the dosage subsequently may be increased if clinically necessary. Zopiclone should not be used in children and adolescents less than 18 years. The safe and effective dose has not yet been established. As elimination of zopiclone may be reduced in patients with hepatic dysfunction, a lower dose of 3.75mg zopiclone nightly is recommended. The standard dose of 7.5mg zopiclone may be used with caution in some cases, depending on effectiveness and acceptability. In patients with chronic respiratory insufficiency, a starting dose of 3.75 mg zopiclone is recommended initially. The dosage subsequently may be increased to 7.5 mg. Treatment with Zopiclone should be as short as possible. Generally the duration of treatment varies from a few days to two weeks with a maximum, including the tapering off, of four weeks. In certain cases an extension beyond the maximum treatment period may be necessary; if so it should take place after re-evaluation of the patient's status.

Clinical experience to date with Zopiclone 7.5mg tablets suggests that the risk of dependence is minimal when the duration of treatment is limited to not more than 4 weeks.

Use of benzodiazepines and benzodiazepine-like agents (even at therapeutic doses) may lead to the development of physical and psychological dependence upon these products. The risk of dependence or abuse increases with dose and duration of treatment; use with alcohol or other psychotropics; it is also greater in patients with a history of alcohol and or drug abuse, or those who have marked personality disorders.

Daytime drowsiness, dizziness, lightheadedness, bitter taste, dry mouth, headache or stomach upset may occur the first few days as your body adjusts to the medication. If any of these effects continue or become bothersome, inform your doctor. Notify your doctor if you develop: rapid/pounding/irregular heartbeat, skin rash, changes in vision, slurred speech, severe drowsiness, loss of memory, incoordination, confusion, depression, irritability or other behavioral changes. medication. If you notice other effects not listed above, contact your doctor or pharmacist.

There may be an interaction between zopiclone and any of the following:

Tell your doctor if you have: kidney disease, liver disease, breathing problems, myasthenia gravis, a history of drug dependence, depression, seizures, allergies. Because this medication may cause drowsiness, use caution operating machinery or engaging in activities requiring alertness. Also limit alcoholic beverages which can aggravate these effects. This medication should be used during pregnancy only if clearly needed. Discuss the risks and benefits with your doctor. Since small amounts of this medication are found in breast milk, consult your doctor before breast-feeding.

If you forget to take it by bedtime, just start again the next night. Never take 2 doses at the same time. Never take an extra dose to make up for a forgotten one.

Store Zopicol (Zopiclone) 7.5mg at room temperature between 68-77 degrees F (20-25 degrees C) away from light and moisture. Do not store the drugs in the bathroom. Keep all drugs away from reach of children and pets.