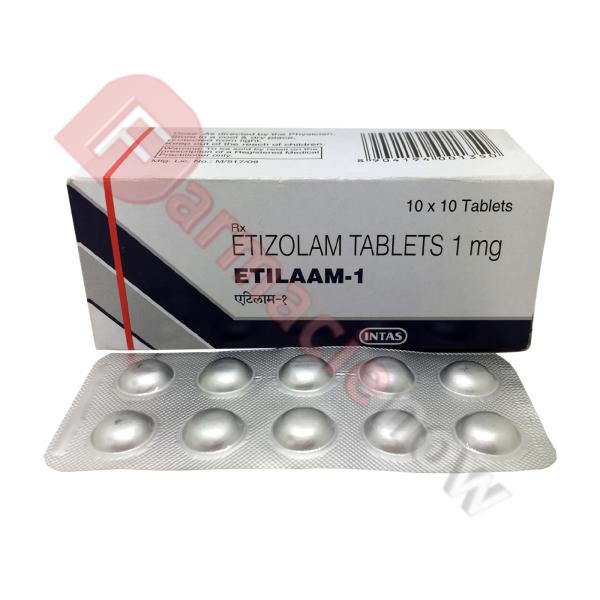 Intas Pharmaceuticals
Out of stock
€3.69 / pill

Etilaam (Etizolam) 1mg is an effective anti-anxiety medicine that is similar to benzodiazepine class of medicines. It is used for the management of anxiety and short-term treatment of insomnia (sleeplessness).

Etilaam (Etizolam) 1mg is marketed under different names depending on the country. This medication is also known as:

Taking these drugs results in:

Common medicinal uses for both drugs include:

Other medicinal uses include capitalizing on their potential anesthetic effects, being used as skeletal muscle relaxants, and in the treatment of other issues with anxiety that occur in neurological and other psychiatric disorders aside from anxiety disorders (e.g., depression).
In a study that compared the effectiveness of etizolam, alprazolam, and bromazepam for the treatment of generalized anxiety disorder, all three drugs retained their effectiveness over 2 weeks, but ETIZOLAM became more effective from 2 weeks to 4 weeks, a type of reverse tolerance.

Major and minor side effects for Etilaam (Etizolam) 1mg:

All drugs interact differently for person to person. You should check all the possible interactions with your doctor before starting any medicine.

Etilaam (Etizolam) 1mg should be used with extreme caution in patients suffering from glaucoma. Appropriate tests should be performed to rule out narrow-angle glaucoma before starting the treatment course with this medicine.

Pulmonary insufficiency
Etilaam (Etizolam) 1mg should be used with extreme caution in patients having a condition where sufficient amount of blood is not reaching the lungs from the heart. The risk of severe to fatal breathing complications is high if this medicine is used in such patients.

Liver disease
Etilaam (Etizolam) 1mg should be used with caution in patients having an impairment of normal liver function. Appropriate dose adjustments and monitoring of liver enzyme levels are recommended. An alternate medicine should be considered if the impairment is severe.

Patients that are using Etilaam (Etizolam) 1mg should stop the use of alcohol until when they have finished taking the dose.

The effect that Etilaam (Etizolam) 1mg has on pregnancy and breast milk is not clearly known. However, a pregnant woman should seek the help of a doctor before they buy Etilaam (Etizolam) 1mg and start using it. Lactating mothers are also supposed to consult with their doctor about the benefits and negative effects that Etilaam has on breast milk.

The use of Etilaam (Etizolam) 1mg may result in blurred in vision or make a patient feel light-headed. When under this medication, it is necessary that you avoid driving or operating any machine as you may end up causing unnecessary accidents.

Before you buy Etilaam (Etizolam) 1mg, consider talking with the doctor about any medical conditions that you may have had before. This will help them know the type of medication to prescribe when you cannot use Etilaam.

If you miss a dose of Etilaam (Etizolam) 1mg, take it as soon as possible. However, if it is almost time for your next dose, skip the missed dose and go back to your regular schedule. Do not double the dose.

Store Etilaam (Etizolam) 1mg at room temperature between 68-77 degrees F (20-25 degrees C) away from light and moisture. Do not store the drugs in the bathroom. Keep all drugs away from reach of children and pets.