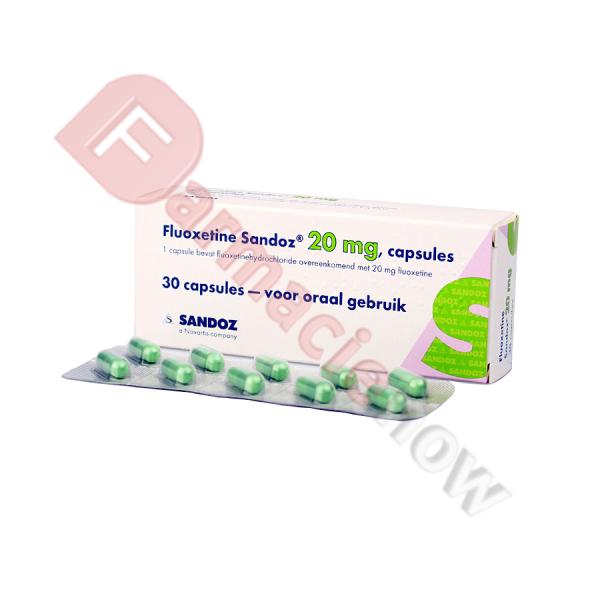 Fluoxetine Sandoz is an antidepressant of the selective serotonin reuptake inhibitor (SSRI) class. Fluoxetine is used to treat depression, obsessive-compulsive disorder, some eating disorders, and panic attacks.It has also been tried as a treatment for autism spectrum disorders with moderate success in adults. It is used to relieve the symptoms of premenstrual dysphoric disorder, including mood swings, irritability, bloating, and breast tenderness. It works by increasing the amount of serotonin, a natural substance in the brain that helps maintain mental balance.

This medicine is used to treat:

How much to take

Your doctor will tell you how much Fluoxetine Sandoz you need to take each day. The usual dose is one capsule taken once a day. Your doctor may increase or decrease your dose depending on your condition.

How to take it

Swallow the capsules whole with a glass of water.

When to take Fluoxetine Sandoz

Some common side effects reported with this medicine include:

If any of the following happen, tell your doctor immediately, or go to Emergency at your nearest hospital:

The above list includes very serious side effects. You may need urgent medical attention or hospitalisation.

Contraindications include prior treatment (within the past two weeks) with MAOIs such as phenelzine and tranylcypromine, due to the potential for serotonin syndrome. Its use should also be avoided in those with known hypersensitivities to fluoxetine or any of the other ingredients in the formulation used. Its use in those concurrently receiving pimozide or thioridazine is also advised against.

Patients who are taking anticoagulants or NSAIDS must be careful when taking fluoxetine or other SSRIs, as they can sometimes increase the blood-thinning effects of these medications.

Its use should also be avoided in those receiving other serotonergic drugs such as monoamine oxidase inhibitors, tricyclic antidepressants, methamphetamine, MDMA, triptans, buspirone, serotonin-norepinephrine reuptake inhibitors and other SSRIs due to the potential for serotonin syndrome to develop as a result.

Tell your doctor if you have allergies to any other medicines, foods, preservatives or dyes.

Tell your doctor if you are pregnant or plan to become pregnant. Your doctor will discuss the risks and benefits of taking this medicine during pregnancy. If Fluoxetine Sandoz is taken during pregnancy, you should be careful, particularly at the end of pregnancy. Transitory withdrawal symptoms have been reported rarely in the newborn after maternal use in the last 3 months of pregnancy.

Tell your doctor if you are breastfeeding or wish to breastfeed while you are using Fluoxetine Sandoz.

Tell your doctor if you drink alcohol. Although drinking alcohol is unlikely to affect your response to Fluoxetine Sandoz, your doctor may suggest avoiding alcohol while you are being treated for depression.

Tell your doctor if you have or have had any medical conditions, especially the following:

Take your dose as soon as you remember, and continue to take it as you would normally. If it is almost time for your next dose, skip the dose you missed and take your next dose when you are meant to.
Do not take a double dose of Fluoxetine Sandoz to make up for the dose you missed. This may increase the chance of you getting an unwanted side effect.
If you are not sure what to do or missed several doses, ask your doctor.

Immediately telephone your doctor for advice, or go to Emergency at the nearest hospital, if you think you or anyone else may have taken too much Fluoxetine Sandoz. Do this even if there are no signs of discomfort or poisoning.

You may need urgent medical attention. If you have taken too much Fluoxetine Sandoz, you may feel sick in the stomach, vomit, feel restless, agitated or excited.

Store Fluoxetine Sandoz 20mg at room temperature between 68-77 degrees F (20-25 degrees C) away from light and moisture. Do not store the drugs in the bathroom. Keep all drugs away from reach of children and pets.